Dr. Michael West, newly inducted member of the Order of Manitoba and a now-retired HSC surgeon, looks back on a marvelous and impactful career.

“ You have operated on relatives of mine. I am indebted to you.”

“This doctor saved my life.”

These are just some of the comments posted on the HSC Foundation Facebook page after the Foundation posted a note congratulating Dr. Michael West on being awarded the Order of Manitoba. Words of praise and gratitude for a renowned neurosurgeon who retired at the end of June after nearly 40 years of practice.

“What I’m doing now doesn’t bear much resemblance to what I was doing at the beginning of my career,” said Dr. West during his last two weeks on the job. “The changes in technology have been amazing.”

Indeed, when Dr. West started his residency in 1973, there were no CT scans and no MRIs. And the tools used to destroy tumours today were in the realm of science fiction.

He cites the example of an acoustic neuroma (a benign growth on the nerves connected to balance and hearing).

“That used to be a 6–18-hour surgery, a week in the hospital, and up to three months of recovery. And there was a great risk of damage to hearing and facial nerves,” he explains. “Today, for most patients, the neuroma is an outpatient procedure because of the Gamma Knife. People usually go home the same day and are back at work in a day or two.”

Dr. West might be best known for setting up Canada’s first Gamma Knife at HSC in 2003. Using 200 beams of radiation, the Gamma Knife treats certain brain tumours with remarkable precision, no incision, and typically zero damage to healthy brain tissue. Dr. West also collaborated on the acquisition and use of the Varian Edge, another minimally invasive radiosurgery technology like Gamma Knife.

In retirement, Dr. West will be trading in the Gamma Knife for a simpler instrument—his old acoustic guitar. He plans to take lessons and re-learn his favourite Jimi Hendrix tunes. You’ll also find him running, reading, and building models with his two grandchildren. He also plans to keep up with the latest research in neurosurgery and deliver the occasional guest lecture at HSC.

“I’m grateful to HSC and the University of Manitoba for their support,” says Dr. West. “I’m excited to see what they will do next for the well-being of our patients.” 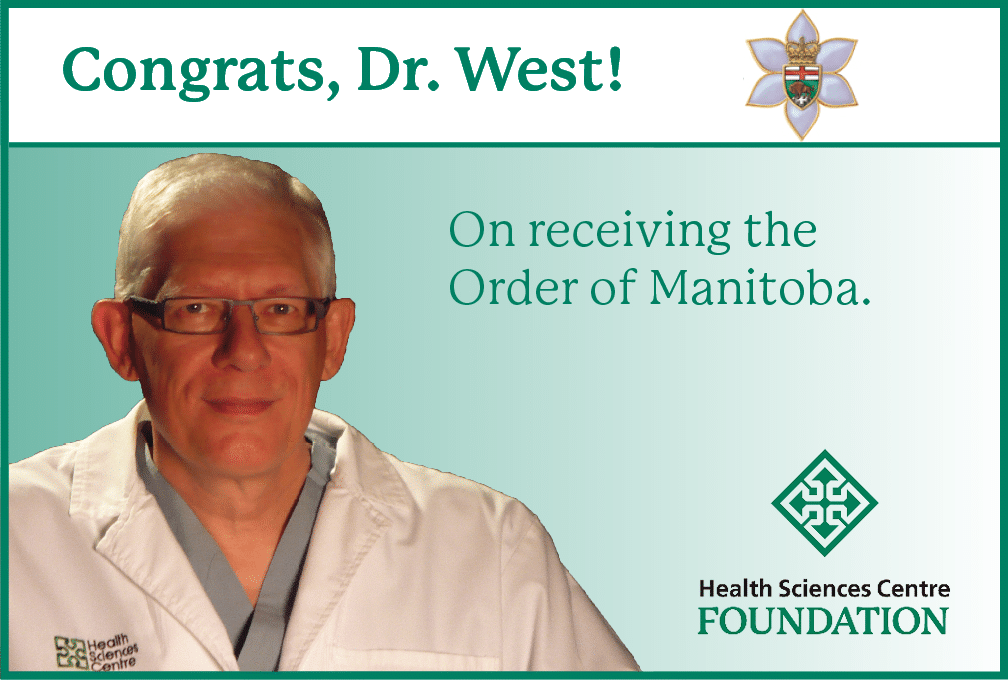