“I could have lost much more than my voice”

If it weren’t for an empty file folder and an open mind, I might not have been around to write this letter to you.

The story begins in my dentist’s chair in the summer of 2016. My dental hygienist noticed a white growth on the underside of my tongue. The dentist took a look and referred me to an oral surgeon, who performed a biopsy. The results showed I had thrush, which is a fungal infection that is usually easily treated by medication.

My family doctor prescribed a potent rinse that I needed to use four times a day for a while. Well, that didn’t work. So, my doctor sent me to a specialist. That doctor prescribed a heavy-duty medication that was so toxic to the liver that I needed regular blood tests to make sure the medicine wasn’t causing too much damage. Aside from the health risks, the drug set me back $5,000. Worst of all, I wasn’t getting better. So, I told the specialist I wanted a second opinion. 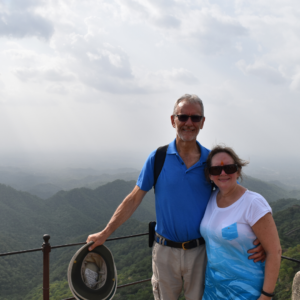 Ted Fransen and wife Esther on vacation:
“I believe that as donors, we play an
essential role in ensuring we have the
best health care possible.”

And so, on September 1, 2017, I met Dr. John Embil and the passionate professionals at Health Sciences Centre.

Dr. Embil walked into the room and showed me an empty file folder with my name on it. Somehow, the paperwork from the last doctor I saw didn’t make its way to HSC. “I don’t know who you are, why you’re here, or who sent you,” Dr. Embil said to me, “but tell me your story.”

And so I did. Dr. Embil is a nationally recognized specialist in infectious disease who listened intently to every detail as I described my whole journey. Until I met Dr. Embil, everyone saw the underside of my tongue as a thrush issue.

Thanks to Dr. Embil’s open mind, he could see that the problem could be something different. Something more sinister, unfortunately.

Dr. Embil then called Dr. Paul Kerr, a head and neck surgeon, and left a long voice mail message telling my story word-for-word as I told it to him. He hadn’t taken any notes, so clearly he had listened carefully to everything I said.

Dr. Embil said he wouldn’t let me leave the hospital until Dr. Kerr or one of his residents saw me. He grabbed a piece of paper and drew a map showing me where to go in the hospital. When I arrived, two resident doctors examined my tongue and then Dr. Kerr joined them. They shared their suspicion with me that I likely had cancer and then performed a biopsy on the spot.

The results showed that I had dysplasia, a pre-cancerous condition. It was only after surgery later in November that they knew for certain that I had cancer in my tongue—a squamous cell carcinoma.

For the three months following my appointments at HSC with Drs. Embil and Kerr, I lived with the fear that I would lose the ability to speak with a third of my tongue about to be removed. As a superintendent of education for a school division, I make my living by speaking. I know now that I could have lost much more than my voice. The wisdom and skill of HSC Drs. Embil and Kerr saved my life and my ability to speak. 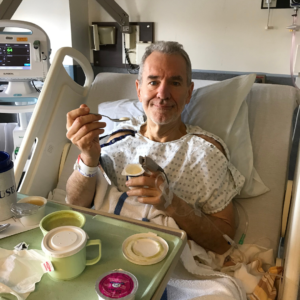 Ted Fransen recovering after a third of his tongue was removed: “It was only after surgery later in November that they knew for certain that I had cancer in my tongue—a squamous cell carcinoma.”

I am writing this letter because I believe that we need to rally together as a community to support the HSC Foundation in its efforts to enrich and enhance Manitoba’s hospital.

Like you, I am a regular donor to the HSC Foundation. I believe that as donors, we play an essential role in ensuring we have the best health care possible. We are fortunate to have HSC. We are fortunate that the people who work at HSC are passionate about saving lives, changing lives, and bringing comfort to families throughout Manitoba. 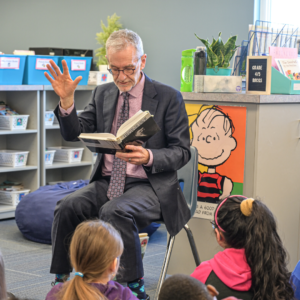 “As a superintendent of education for a school division, I make my living by speaking. I know now that I could have lost much more than my voice.”

Please join me in supporting the HSC Foundation today.