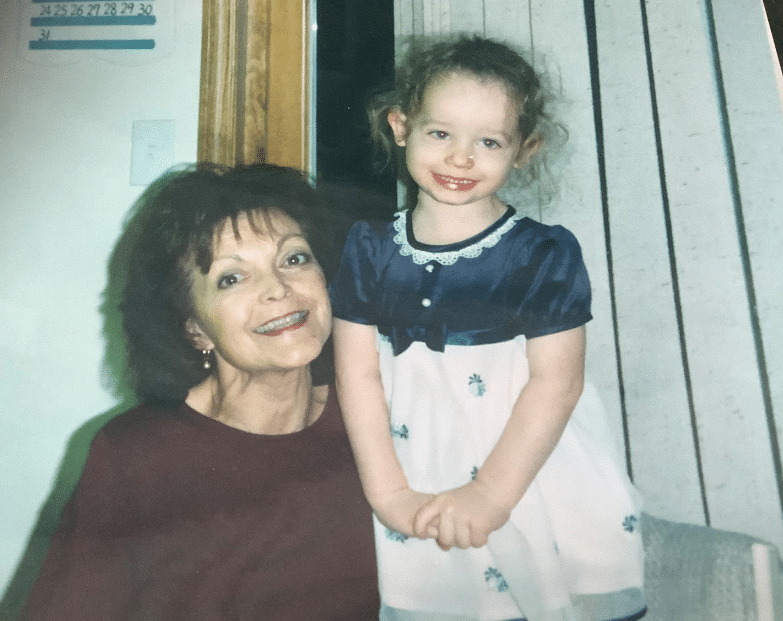 Mary Milligan and her great niece in 2000. Milligan was post-surgery, but still undergoing chemotherapy and radiation. “I’ve always been a positive person and because of this positive experience with Dr. Tan, I’ve remained a positive person.”

When Mary Milligan was a flight attendant, she would see people flying into Winnipeg regularly. When she recognized a repeat passenger, she always said hello. She recalls one young woman would often fly to Winnipeg from Nova Scotia to visit her boyfriend. After marrying her boyfriend, the young woman brought their wedding album on board during one of her trips to Winnipeg. Milligan remembers her colleagues looking at the album, but a persistent flickering in Milligan’s right eye was bothering her that day. Whether that was the reason she didn’t look at the album is hard to say, but Milligan would later discover that she has a unique connection to the passenger.

In June 2000, Milligan was diagnosed with adenocarcinoma of the lung. The flicker in her eye was the symptom of a tumour. Tests revealed the cancer had metastasized to her right eye and lymph nodes, but the primary site was her lung.

When you hear the word cancer, “everybody panics, everybody becomes negative and goes into a shell,” says Milligan. “But I think it’s important to stay positive, even though it’s really hard. You have to talk about it and, most importantly, you need to develop a positive rapport with your medical team.”

After receiving her diagnosis, she met thoracic surgeon Dr. Lawrence (Larry) Tan at Health Sciences Centre. Over the next seven years, Milligan and Dr. Tan would get to know each other very well. She believes the positive experience she had in his care changed the course of her life.

Milligan’s operation to remove the lung cancer was three months after her diagnosis. “Dr. Tan was younger then,” she says, “but we just got along so well. I trusted him because he put me at ease and gave me the sense that he knew what he was doing.”

The surgery was a success. Milligan went into the hospital on Tuesday and was out on Friday. But as the radiation and chemotherapy progressed, Milligan continued to see Dr. Tan. At first every month, then every six months, then every year. After seven years, Dr. Tan informed Milligan she wouldn’t have to see him anymore because she was cured of cancer. “I told him I would go through withdrawal. I’d become quite attached,” she says of Dr. Tan, who now serves as Section Head for Thoracic Surgery at HSC.

It wasn’t until some time had past post-surgery that a nurse at HSC made the connection between Milligan and the young female passenger.

“‘If you were a flight attendant, you must know Dr. Tan’s wife,’ the nurse noted,” says Milligan. “At first, I didn’t know who they meant, but when they described her and how she used to fly to Winnipeg regularly to see her then-boyfriend, I remembered her. I just can’t believe that if I’d looked in the wedding album that day, I might have recognized the face of my surgeon as the groom in the photos.”

About a year-and-a-half after her surgery, Milligan had joined Cancer Connection through CancerCare Manitoba. She joined other survivors regularly to share their experiences. They weren’t allowed to share their doctors’ names, but she could always tell by the positive experiences they had when people were talking about Dr. Tan.

Over the years, Milligan would refer others to Dr. Tan. In fact, in the past six years, her husband, her dear friend, a cousin’s wife, another cousin’s husband, and her sister-in-law were all patients of Dr. Tan. Due to his professionalism, expertise, confidence, and bedside manner, Milligan wouldn’t have it any other way.

Milligan likes to curl up in her home in Tuxedo with a good book these days, preferring stories based on real people and the strange coincidences that shape events. While experiences like the journey she’s been through more often than not change a person, Milligan differs. “My attitude about life hasn’t changed. I’ve always been a positive person and because of this positive experience with Dr. Tan, I’ve remained a positive person.”

“By the time I had the opportunity to see Mary, she had cancer in her lung, lymph nodes, and behind her eyeball. Mary’s cancer seemed impossible to survive,” says Dr. Larry Tan. “I thought ‘We will do what we can for her, but there’s no way that she will ever get through all of this.’ Here Mary is 20 years later—I never thought she would be able to pull through. I didn’t think she would survive the first three years, much less the first seven, and now 20! Mary has always had such a positive outlook; she’s extremely cheerful, friendly, and all around a great person.”

You can help patients like Mary Milligan by donating to the Advancing Thoracic Surgery Fund. Money raised advances thoracic care for all Manitobans. To make a gift to this fund, please call us at 204-515-5612.