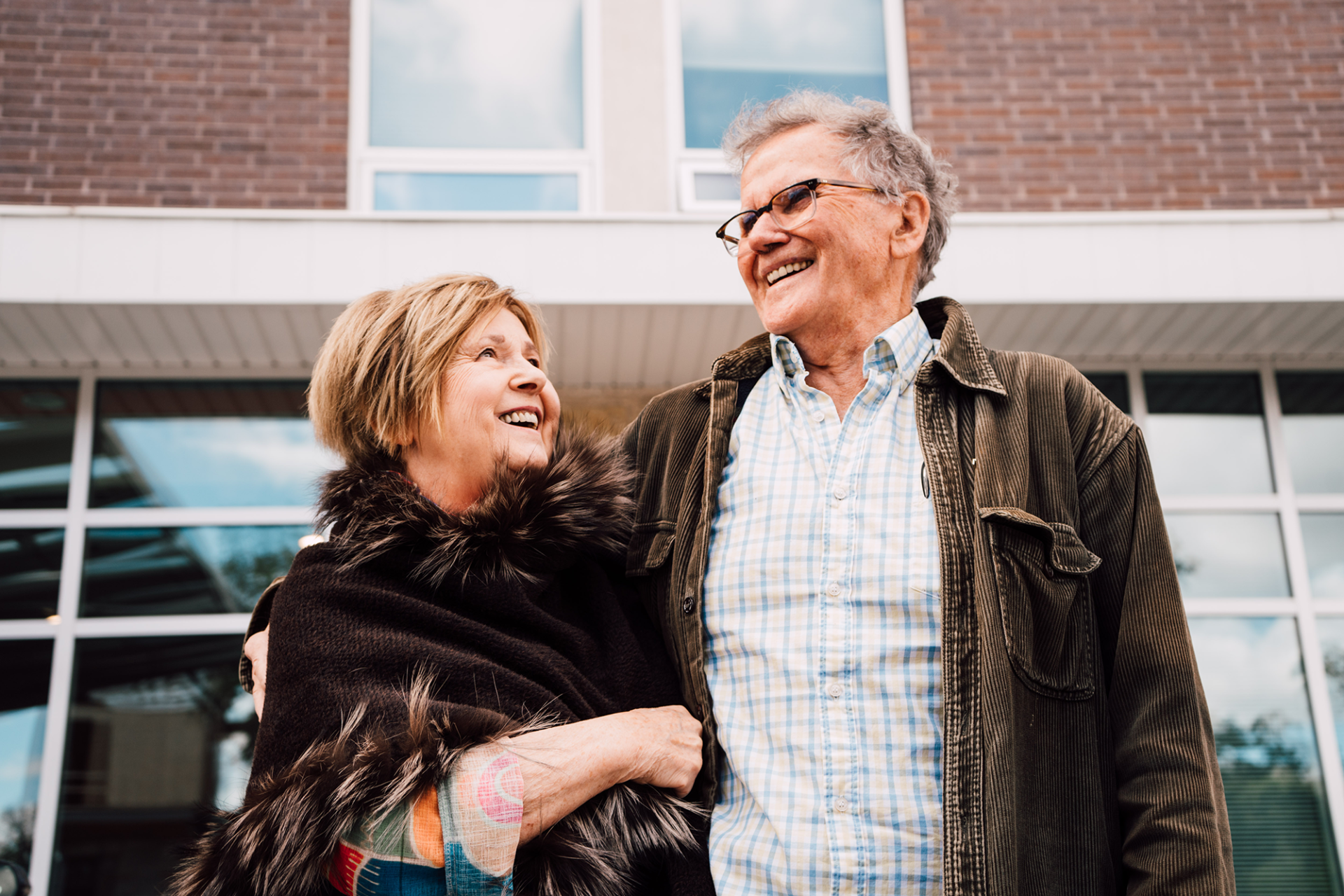 Margaret and Paul Wright didn’t shed any tears on their way home from Health Sciences Centre one difficult day in 2015. Instead, they calmly called their three adult children—Lisa, Danny, and Michelle—from the car to invite them over for a family meeting that evening. The couple had just learned that Margaret’s recently discovered esophageal tumour was untreatable and that she likely had 18 months to live, at most.

Margaret was diagnosed with late-stage autoimmune hepatitis in 2003. With compromised health, her doctors initially thought that her liver would not be able to tolerate anesthetic or chemotherapy to treat the new tumour. Any esophageal treatment option would surely hasten her demise, she was told.

When they arrived home to prepare for a very serious meeting with their kids, the phone rang. On the other end was Dr. Kelly Kaita, Margaret’s liver specialist, with a hopeful message. In the hours since she left HSC, they had done some further investigation and now believed that a surgical option was indeed possible.

Margaret’s esophageal cancer surgery proceeded and now, at the time of this story, almost eight years after the operation, Margaret remains cancer-free. While Margaret’s compromised liver is still under careful observation, she and Paul continue to live life with joy, gratitude, and generosity. It’s a spirit that drives their ongoing philanthropy and support of the Health Sciences Centre Foundation, along with other charities.

Margaret and Paul both came from modest roots. Margaret was born in Northern Ireland to Margaret and Alexander (Sandy) Suitters. The family moved to Canada when Margaret was just two-years-old as her father pursued a career as a minister, first with the Presbyterian Church and then with the United Church of Canada. The Suitters family first settled in Willowdale, Alberta (just outside of Red Deer), followed by stints in Boissevain, Starbuck, Deloraine, and Winnipeg, Manitoba, and then Fort Qu’Appelle, Saskatchewan. At the age of 16 following her father’s demise, Margaret moved to Winnipeg to pursue her education.

Upon arrival in Winnipeg, she lived on Corydon Ave. across the lane from a young man named Paul Wright who lived with his aunt and uncle on McMillan Ave. The two met in 1965 and married in 1969.

Paul was born and raised in Souris, Manitoba, to Marie and Raymond Wright. Paul lost his mother when he was a toddler and was raised by his father and by his paternal grandmother Elizabeth Wright. He took odd jobs in Souris including working at the local pool hall and as a mechanic’s assistant. He also worked at the Souris Creamery, performing all sorts of tasks including some bookkeeping. Noticing his proficiency with numbers, the manager, Ivan Kaufmann, suggested that Paul pursue a career as a chartered accountant. It was the decision to pursue his CA designation that brought him to Winnipeg. He earned his designation in 1967 and in 1973 launched the accounting firm Warms Rogers Wright with two partners. They merged with Coopers and Lybrand in 1989, which later became PricewaterhouseCoopers. Paul retired from the firm in 2005 but stayed on as a consultant until 2021. He continues to work with clients independently.

Margaret and Paul have both been active community volunteers over the years. Paul has shared his accounting skills as a volunteer with the Manitoba Association for Children with Learning Disabilities, Versatech, and his children’s Montessori School. Margaret is active in the local Baha’i community: hosting study circles, helping with Soul Food evenings, and performing as a puppeteer for children’s classes. In their spare time, Paul and Margaret enjoy travel, including trips to Alaska, China, Hawaii, the Panama Canal, the U.K., Europe, and an annual road trip to the spa in Moose Jaw with the roof down on their convertible. Additionally, Paul is a passionate coin collector and Margaret an avid reader. In fact, Margaret is the convenor of a successful club called “Dinner and a Book”, which was temporarily renamed “A Book” during COVID-19.

Margaret developed a passion for books at a young age. Her father’s bookshelves were filled with good reads, and she developed a particular interest in the works of Charles Dickens along with the Agatha Christie novels she used to buy from the drugstore in Deloraine. She tried baseball as a child but set the sport aside after knocking the catcher unconscious by tossing a bat after hitting a single.

Above all, Margaret and Paul find their greatest joy with their family: daughter Dr. Lisa Wright, PhD, her husband, Dr. Paul Rezutek, PhD (both clinical psychologists), and their son Sam; son and daughter-in-law Danny Wright, FCPA, and Meghan Wright, CPA, and their children Pella and Peyton; and daughter Michelle Wright, who is completing her PhD in clinical psychology, and her children Zachary and Michaela.

Margaret and Paul live each day in gratitude. They are particularly grateful for Dr. Kelly Kaita, Dr. Allan Micflikier, and Dr. Larry Tan of HSC, whose expertise and compassion have saved and enriched Margaret’s life.

Their approach to life and philanthropy—and their advice to others—is straightforward: “Bloom where you are planted.” Whatever life throws your way, find a way to thrive, flourish, and give back.”