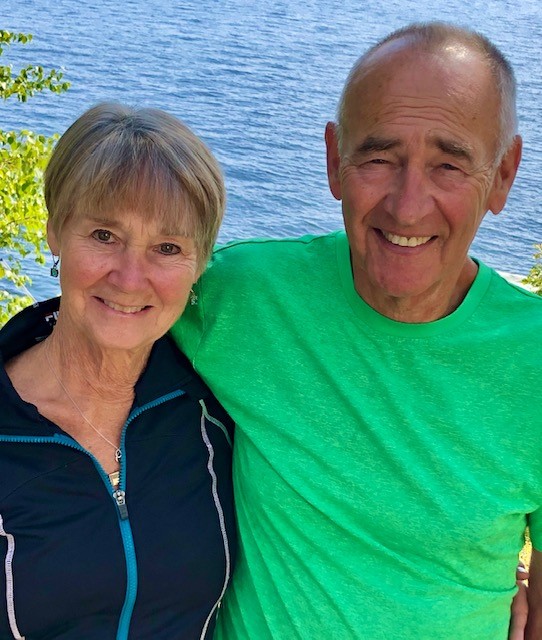 Diana and Clive Morrison at their cabin at Falcon Lake.

“He was dead weight—then he fell to the floor.”

July 13, 2020, looked like any other day for Clive and Diana Morrison. The married couple of 49 years had finished dinner at their home in Winnipeg and were settling in for the evening. Clive was watching TV when he suddenly felt a strange feeling in his head. He tried to get out of his chair, but he couldn’t—his left side was paralyzed. He called out for his wife but couldn’t form words.

“I knew immediately it was a stroke—I dialed 9-1-1 as fast as I could,” recalls Diana.

Paramedics arrived within 10 minutes and rushed Clive to HSC Winnipeg’s Diagnostic Centre of Excellence (DCE) where he promptly underwent surgery. The Centre opened its doors in early March 2020, supported by a $5 million donation from the late Paul Albrechtsen—legendary Manitoba businessman and philanthropist—and a $5.2 million investment by the Province of Manitoba.

Under one roof, the seven-storey, 91,000-square-foot DCE houses integral components of stroke care, such as the angio suites (multipurpose rooms where neuroradiologists observe blood flow to the brain),  a patient recovery area, and office spaces for therapists working with stroke survivors.

“The DCE is a massive advantage for Manitobans,” says Dr. Jai Shankar, neuroradiologist at HSC. “We have been able to shorten in-hospital transport time by 10-15 minutes—this makes an immense difference. Every 15 minutes saved equals a 5% increased chance of a better outcome. Every percentage point counts and every second counts as two million brain cells die every minute once a stroke begins.”

The quicker Dr. Shankar and his team can receive the patient, the higher the likelihood of them being able to surgically remove a blood clot, as they did for Clive Morrison.

Aside from experiencing fatigue, a suppressed appetite, and moderate issues with balance, Clive is doing remarkable post-stroke.

“I visited Clive at HSC the day after his stroke and couldn’t believe how well he was doing, especially considering the condition that he arrived in. Anybody who sees Clive now can’t believe he had a stroke—he moves at 100 miles an hour,” says Diana.

“We can’t say enough good things about HSC,” says Clive. “Everyone was absolutely fantastic. Fabulous care, fabulous recovery. The paramedics were excellent, and I am grateful for how fast they were able to get me to HSC. We are lucky to be living in Winnipeg.”

“The DCE gave Clive Morrison a better chance of a positive outcome—we were able to do everything faster,” says Dr. Shankar.

Your support of the HSC Foundation saves lives, changes, and brings comfort to families throughout Manitoba. Please click here to make your gift today.