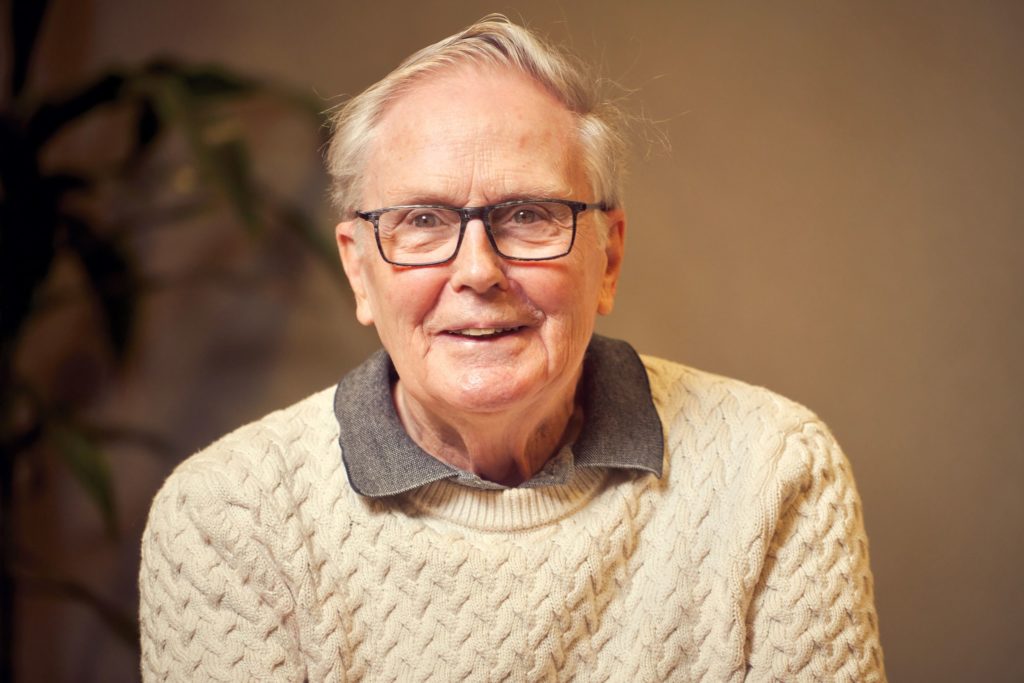 After graduating with a master’s degree in physics from the University of Manitoba, Ian Sutherland wondered whether he really wanted his career to “be just a series of numbers that are going to be published.” Fortunately, he was impressed by the example set by a good friend and decided to enrol in the Faculty of Medicine.

In 1955, during his first year in medical school, Ian married Eva (née Freko). “I don’t know if she knew what she was getting into,” says Ian of Eva, who passed away in 2016. “We started having kids. I was working hard and Eva used to say that her only holiday was when she went into the hospital to have another child!”

The Sutherlands had four children: Scott, Michael, Karen, and Eric. Sadly, Karen passed away in 2016, less than a year before Eva.

Eva Sutherland, who had a degree in library sciences from the University of Toronto, supported the young and growing family while Ian earned his M.D., working for the City of Winnipeg’s Library Services. “Eva was a patient, loving lady and we were blessed as a family,” says Ian.

Still passionate about physics, and now with a medical degree in hand, Ian accepted a position with the Atomic Energy Control Board in Chalk River, Ontario, working as a medical advisor. He stayed for two-and-a-half years before accepting a new position with Atomic Energy of Canada in Pinawa, Manitoba.

In 1966, Ian began a residency in diagnostic radiology at the U of M, focusing on nuclear medicine. He began practising upon graduation in 1969, eventually serving as the head of the Nuclear Medicine program and subsequently as the head of the Department of Radiology at the U of M and Health Sciences Centre. In 1990, he accepted an appointment to the office of the Vice-President at Health Sciences Centre and retired in 1997. He is an Honourary Fellow of the American College of Radiology and in 2019, he was named a Fellow of the Canadian Association of Radiologists.

Upon retirement, Ian joined the Board of Directors of the Health Sciences Centre Foundation in 1997, serving until 2006 when he was named an Honourary Director. While serving on the Board, he led the research grant allocations process, working to attract high-quality applications and volunteers to review them. He was eager to support the efforts of young researchers.

“The grants weren’t large at the time,” recalls Ian, “but our support helped researchers keep their work going and attract funding from other sources.”

Outside of work, Eva and Ian were very active in Young United Church, with Ian serving as Chair of the Board for a while. Ian still attends church and still tries to make a weekly visit to HSC to have lunch with former colleagues. He also enjoys spending time with his 15 grandchildren and six great-grandchildren who live in Winnipeg, St. Andrews, and British Columbia.

Ian Sutherland came from modest roots. He was born in Cultus Lake, British Columbia, to parents who were both deaf, which in those days made it difficult to earn a living. They moved to Winnipeg where they could be helped by his maternal grandparents. Winnipeg became home.

Eva and Ian thrived as a couple, established deep roots in the community, and raised a dynamic family. Ian contributed in remarkable ways to his profession as a scientist, practitioner, and leader. The Sutherlands contributed to the HSC Foundation with enthusiasm over many years, and Dr. Ian Sutherland is proud to leave a legacy gift with Eva as a lasting expression of support and gratitude for HSC.