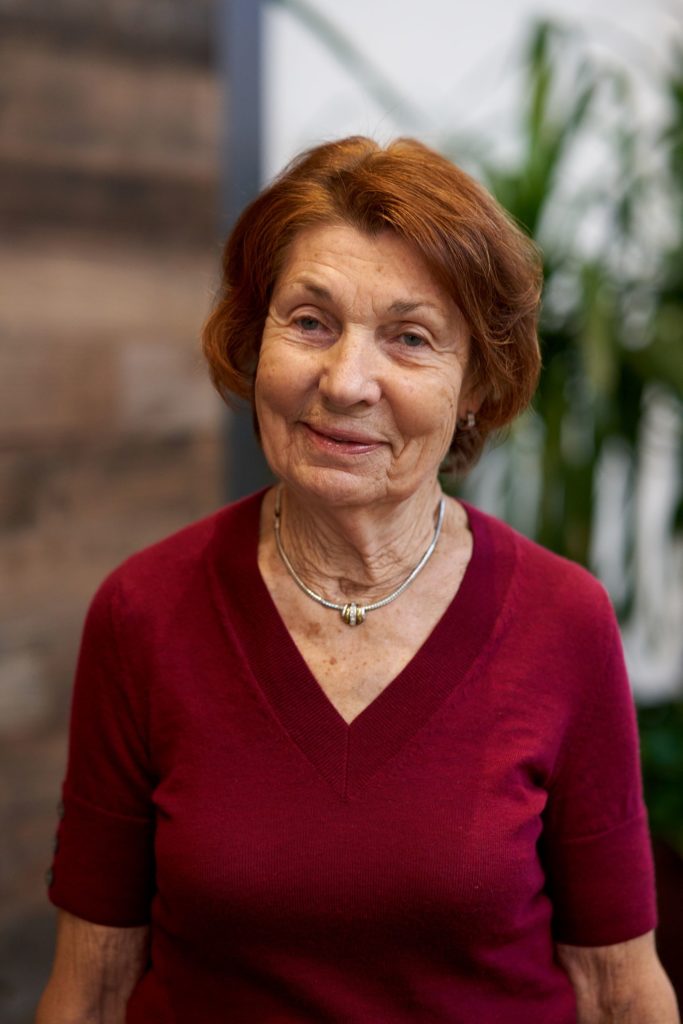 She describes the earliest years of her life as scary. As a toddler in Chortitza, Ukraine, Katherine Klassen would play outside with her brothers while bombs fell in the distance and Europe trembled. It was the early 1940s, and Klassen still remembers the horrors of World War II vividly.

As a family of German descent, the Klassens were protected by the German army and sent out of Ukraine. They settled for a while in the village of Warthegau, Poland, and were placed in the home of an expelled Polish family. Klassen always wondered what happened to them.

War and sadness persisted; Klassen recalls riding in an open, horse-drawn carriage seeing bodies on the side of the road. By now, her father was conscripted into the German army, never to return. Her heroic mother, with four children and her own mother in tow, managed to move the family to Germany where they stayed with a farming family in Neuwalden until the end of the war.

Through the Red Cross, Klassen’s mother managed to discover some cousins in Canada who had moved here in the 1920s. The connection was made and the family started to receive care packages and dream of a life in Canada. Through the Mennonite Central Committee (MCC), Klassen’s family applied to come to Canada as refugees, but were denied because Klassen’s grandmother wouldn’t be able to work. And so, still with the help of the MCC, the family moved to Paraguay and lived among other German-speaking refugees in an area known as the Green Hell. The land was difficult to farm and life was challenging.

The family re-applied to come to Canada after Klassen’s grandmother passed away in Paraguay, and were accepted because by then Klassen’s mother had two sisters living here. After 10 years in Paraguay, Klassen arrived in Winnipeg at the age of 18 with a grade six education. She went to Tec Voc in the evenings to learn English and worked in a sewing factory during the day. She eventually took a job at Kimberly-Clark and continued to study English at Success College.

At the age of 24, with improved English and a few dollars put away, Klassen decided to get the formal grade 11 education she needed to go into nursing at Red River Community College. She was turned away by one city high school, as the principal didn’t think she would fit in with the 17- and 18-year-olds and there were no adult education programs at the time. Not to be discouraged, Klassen moved to Winkler where she finished grade 11, graduated from grade 12, and then entered the nursing program at St. Boniface Hospital.

Upon graduation in 1969, Klassen took a position as a surgical nurse at Health Sciences Centre. It was a short, but impactful stint, and she remembers being inspired by legendary nursing educator Delores Gembey. In 1971, Klassen caught the travel bug and headed off to Europe with a close friend on a popular “one-dollar-a day” program. Their travels took them to England, France, Holland, Greece, and Germany, where she connected with the family that housed her and her family toward the end of the war. Klassen then accepted nursing positions in Switzerland, first in Heiden, Appenzell, and then in Zurich, where she didn’t know a soul and was unfamiliar with the culture. While in Switzerland, she was convinced by a friend to travel to Russia. It was 1974 and Communism made travel difficult. The visa application process took six months, and the visa was withdrawn mere days before the planned adventure. So, Klassen and her friend travelled instead by train to Turkey, Iran, and Afghanistan, where she visited the Soviet embassy in Kabul to re-apply for a visa. Their travels took them next to Pakistan, India, and Nepal before returning to Afghanistan to claim the visa that would allow her to finally enter Russia. While there, she was closely monitored, her movements were restricted, and she needed to report regularly to a guide about her whereabouts. Still, she managed to meet up with relatives who lived in Tashkent and Alma-Ata. A memorable trip indeed—an experience, she says, that reminded her how “fortunate I was to have escaped the torture of the Communist regime.”

She later returned to Winnipeg and accepted a position in the stroke unit at Deer Lodge as there were no surgical nursing positions available in the city. This was a disappointment as her passion was in surgical nursing: “Surgical nursing involved constant learning,” she reflects. “There was always something new going on in the operating room.”

Not long after starting her job at Deer Lodge, Klassen gave birth to Christianna, her only child. She then returned to the workforce as a surgical nurse at Misericordia Hospital in 1976, retiring in 2017. She actually tried retiring in 2005, but got tired of the early morning calls asking her to come in for shifts here and there. And so she went back to work half time until her full retirement. Today, she spends her time tending to her garden and spending as much time as she can with Christianna, her husband Tyler, and their young children Cameryn and Hudson. Being a grandmother brings her remarkable joy, and she plays with them as actively as she can: “What is better than hearing kids laugh?,” she asks rhetorically.

Klassen has been a long-time donor to the Health Sciences Centre Foundation and had started giving some thought to confirming a legacy gift. After learning more about legacy giving and attending the Bannatyne Legacy Circle Celebration in 2019, her mind was made up. “I have always appreciated the experience I had at the Health Sciences Centre early in my career and the event convinced me to participate,” she says.

When Katherine Klassen first arrived in Canada, she would listen to the radio as a way to improve her English. She recalls a pastor who would always end his sermons with the following bit of inspiration: “To live abundantly, you must give abundantly.” It is an insight that has shaped her life, even having lived through tumultuous and frightening early years.

“Gratitude and thankfulness have brought me to participate in legacy giving,” says Klassen. “I am thankful for the opportunities this country has allowed me to pursue and accomplish.”