“I will have to monitor my health closely for the rest of my life, but I feel good. I feel good, and I feel grateful.” 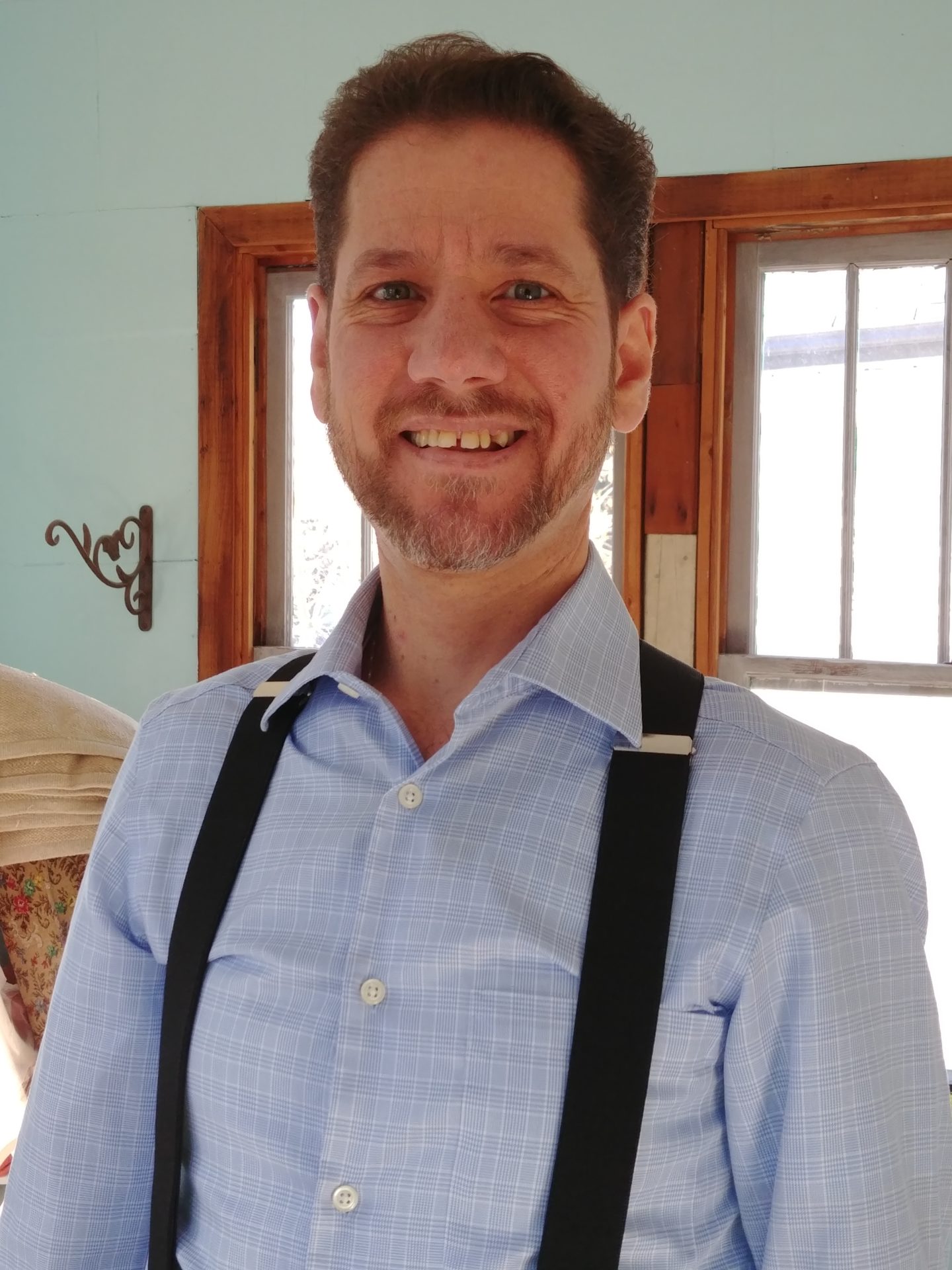 Born with Wilson’s Disease, Charles Schroeder has had three liver transplants throughout his lifetime.

I stand before you today a grateful man, a blessed man, and probably the longest-surviving pediatric liver transplant patient in Canada.

I’ve had three liver transplants in total—two in London and one in Toronto. And when it comes to the Paul Albrechtsen Interventional Radiology Suites at HSC, I guess you can call me a frequent flyer. I was the seventh patient to be treated in the Suites shortly after the doors opened in March 2020, and I have been back nine more times since for various biopsies and procedures.

I’ll share my thoughts about the Suites in a moment, but first let me tell you how I got here.

I was born with a genetic condition called Wilson’s Disease. That means I was missing a certain enzyme that results in a build-up of copper in my body, with terrible effects on the liver. In 1986, when I was nine-years-old, I suddenly became ill. It became very clear, very quickly that my only hope for survival was a liver transplant. The only hospital performing pediatric liver transplants in Canada was in London, and it had only been two years since their first successful surgery.

My transplant was a success and I returned to Winnipeg after celebrating my tenth birthday in a hospital bed. Life went on. I graduated high school and then, in my second year at Winkler Bible Institute, I developed a form of cancer called Non-Hodgkin’s lymphoma, which isn’t uncommon for people who have received organ transplants.

The cancer was brought under control with chemotherapy and I was able to pursue my education in physics in Winnipeg and medical physics in Edmonton. The immune suppressants that I was on needed to be reduced to prevent a reoccurrence of the cancer, but that caused my body to slowly reject the liver that had been functioning well since I turned 10. I felt sick from time to time and eventually it progressed to significant edema, ascites, and encephalopathy resulting in hospitalization.

In 2009, at the age of 32, I went back to London for my second liver transplant. Not long after I returned to Winnipeg, I had my first of two visits to the old Interventional Radiology suites for a femoral angiogram and angioplasty. The space was getting older, but the staff were truly exceptional—just like they are today. 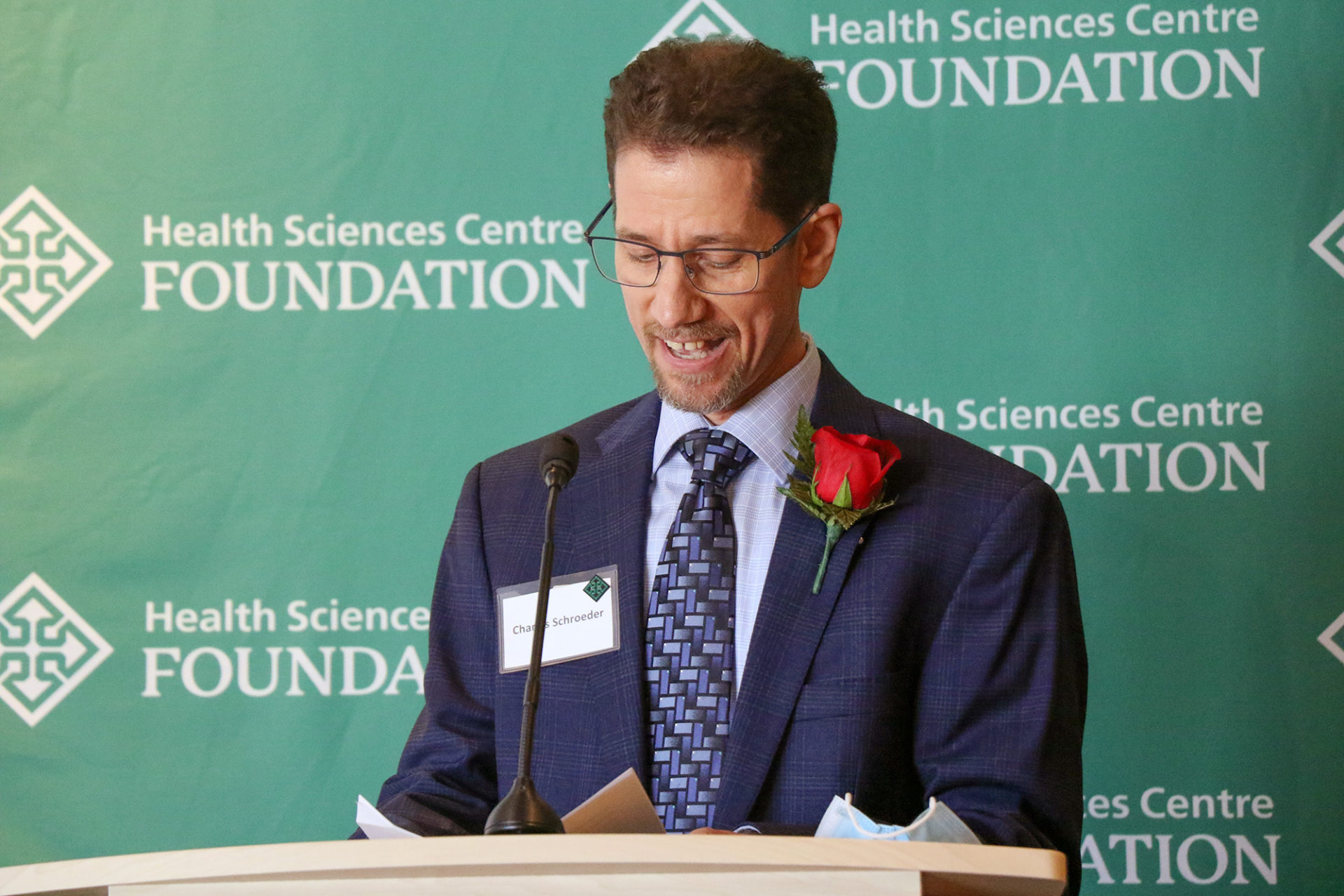 I did well for quite some time, but by January 2020, complications returned and it was discovered I had a back-up of bile in my liver. On March 4, I was seen for the first time in the new suites—again, a femoral angiogram. I was immediately impressed by the Paul Albrechtsen Interventional Radiology Suites. They are big, well lit, and clean. There is a comfortable waiting room and the space is equipped with large monitors that doctors use to see your arteries with tremendous clarity. My doctors, including Dr. Gord Kulbiski and Dr. Stephanie Dyck, were able to show me on the screen what was going on with my bile ducts. Simply put, the space is beautiful, functional, and gives you the sense that great things happen here.

Ultimately, I went to Toronto in October 2020 for my third liver transplant. On a follow-up visit to the new Interventional Radiology Suites, Dr. Cassano-Bailey, who you heard from earlier, and Dr. Stephanie Dyck noticed some unexpected narrowing of the artery going to my liver, easily seen on the remarkable new imaging equipment we have at HSC. I was sent back to Toronto for urgent assessment resulting in another surgery, and then returned to Winnipeg. My last visit to the new suites was in February 2021 when I went for what’s known as a transjugular liver biopsy.

There have been many other twists and turns on my health journey, but time doesn’t permit me to share all of the details today. But I will share this. The people who work in interventional radiology at HSC are outstanding. The doctors, the nurses, the technologists, the clerks—everyone is focused on the well-being of the patients. Thanks to the new space and state-of-the-art equipment, these dedicated professionals can truly showcase their skills and provide exceptional care.

Obviously, I will have to monitor my health closely for the rest of my life, but I feel good. I feel good, and I feel grateful. Grateful to God, grateful for my wife Christine and her unwavering love and support, grateful for the generosity of the late Paul Albrechtsen and the public funds that made these suites possible, and grateful for the medical teams in London, Toronto, and at HSC in Winnipeg.