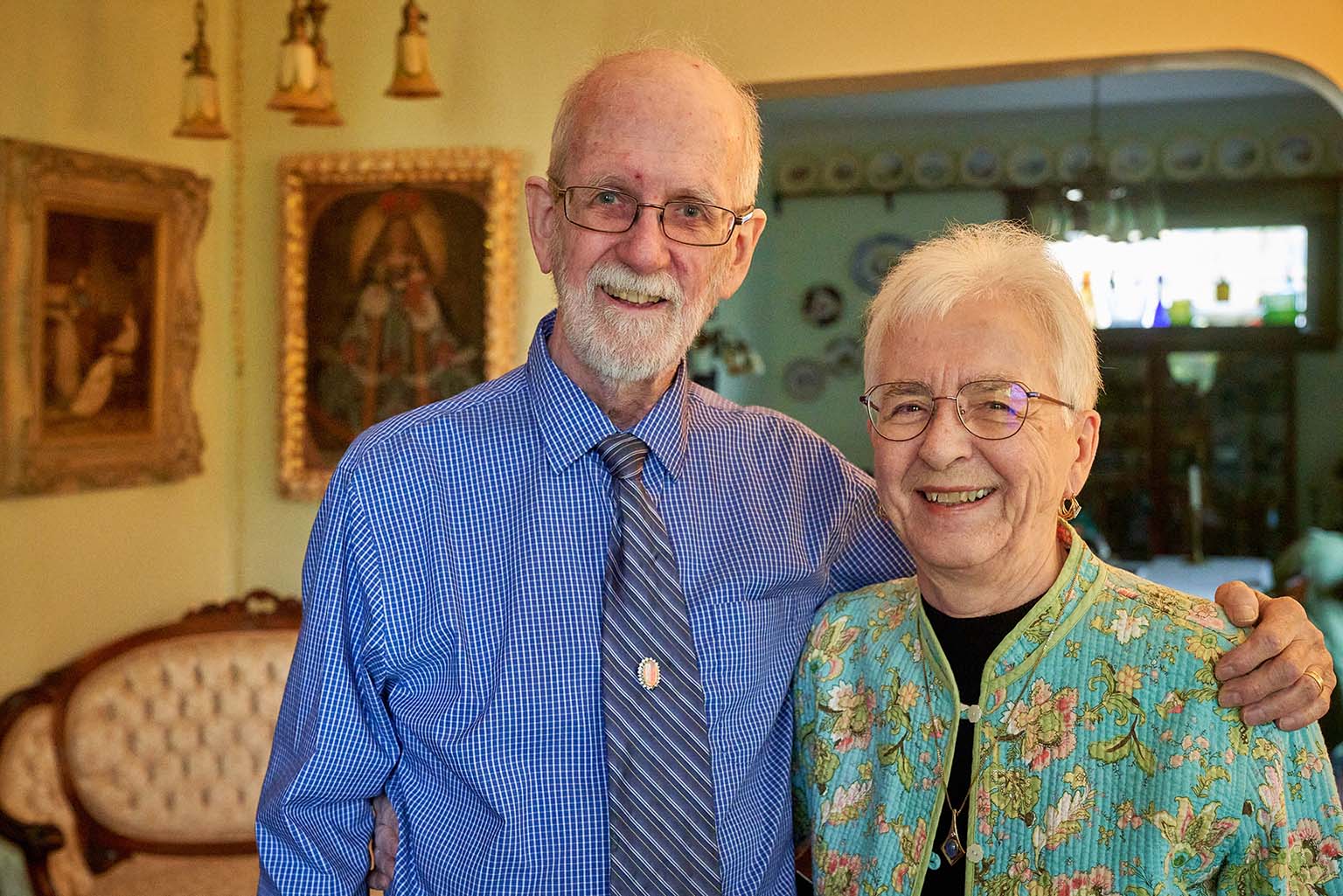 They learn, they laugh, and they love life together. One is a respected professor who doesn’t quite understand the definition of “retire”; the other is a former academic whose curious, scientific mind is now applied to developing a deep understanding of old Chinese spectacles, glassware, and scores of other fascinating antiques.

Juliette (Archie) and John Cooper are a grateful and spirited Riverview couple who have decided to join the Bannatyne Legacy Circle. They are familiar with Health Sciences Centre through Archie’s storied occupational therapy career at the University of Manitoba’s College of Rehabilitation Sciences. Archie also chairs a research peer review committee at HSC—an assignment she accepted “umpteen years ago”—and has long understood and appreciated the HSC Foundation’s important contribution to advancing health research in Manitoba. But it was the remarkable care John received as a patient a couple of years ago that ultimately inspired the decision to commit to a legacy gift.

“The care that he got, and the attention that was given to us, was outstanding. John was treated in a way that was affirming to him. Everybody on the floor, from the surgeon to the person at the desk, treated us with amazing respect. I can’t say enough good about it,” says Archie. “And so at that point, we thought, yeah, this is something we need to support. We can’t take this level of care for granted.”

Another thing the Coopers don’t take for granted is Archie’s long, ongoing relationship with the University of Manitoba. When she came to Winnipeg after earning a diploma in Physical and Occupational Therapy from the University of Toronto, the University of Manitoba invited her to deliver a few lectures on pediatric psychiatry to occupational therapy students. Turns out she enjoyed the teaching (and was pretty good at it!), so she continued to teach while earning her Bachelor of Occupational Therapy degree. Through her course work, she became fascinated by human anatomy, ultimately earning her Master’s degree and, at the age of 45, her PhD.

She retired in 2005, but grew bored very quickly. She came back to teach a couple of courses at the university. Before too long, she received a surprising phone call asking her to serve as the Interim Dean at the Faculty of Music.

Upon hearing that news, John rolled off the couch, laughing: “That’s the silliest thing I’ve ever heard,” said John to Archie at the time. “You can’t play a single instrument (aside from an occasional attempt at the accordion that still sits in the Cooper attic). How can you possibly do this?”

“I can do one thing,” replied Archie. “I can play the spreadsheets.” And so, Archie, who had previously served as Director of the (then) School of Medical Rehabilitation and Associate Dean (Allied Health) at the Faculty of Medicine, accepted the position while the university searched for a new permanent Dean.

Archie’s challenging academic career as a student, teacher, and administrator was made possible by John’s decision to become a stay-at-home dad to the couple’s two daughters: Pilar and Elizabeth. John earned a PhD in Genetics at McMaster University after having been at Queen’s University in Kingston, before moving to labs in Hamilton and Houston and then accepting a position at the University of Manitoba. After several years, the program’s focus shifted from basic science to applied science. John’s passion for basic science drove him to look for opportunities elsewhere, but interesting and available research positions were few and far between. By 1980, John made the decision to stay home, take care of his girls, and turn his passion for antique collecting into his new career. He started doing shows at malls in Winnipeg and throughout western Canada, before joining Sterling’s and then Scotia Antiques as an associate. By 1990, he was running his own business (Abbey Antiques & Art on Corydon Avenue) and still works four days a week, eager to learn about the items he acquires.

“I really like antiques. I like their history. I like discovering how they’re made, why they’re made, and finding out what societal pressures at the time caused them to be made at all,” says John. “They all have an aura about them, and so everything I get, I try to understand the history.”

John’s own history begins in Montreal where he was born to Alex Cooper and Violet Gill who had three children together. The couple separated and John lived with his father who eventually married a woman named Grace Keiffer. Together, Alex and Grace had four children. It was a loud and busy household with seven kids in total. “There were a few traumatic incidents,” John says. “But we all got along ok.” Aside from Montreal, John also lived in Toronto and a number of small towns.

Archie was born in Chilliwack, British Columbia, to Juliet and Bert Hamilton. The family lived in BC at the time as Archie’s dad trained for the army. After Bert returned from the war, the family moved to northern Manitoba, Ontario, Bolivia, and Peru for Bert’s work. It was during an earlier job posting in Manitoba when Bert met Juliet. Archie celebrates her mother’s French heritage and her father’s Scottish roots. Her well-entrenched Archie nickname came from her father’s insistence that, had she been a boy, her name would have been Archibald Roderick, a nod to her Scottish lineage. (For the record, her Scottish grandparents were appalled: “You can’t give a girl a man’s name!,” they insisted. That said, they gave up and eventually started calling her Archie.)

Ultimately, young Archie found her way to Toronto to earn her university diploma, but not before cramming four years of high school science into six months of coursework. Upon completing her diploma, she needed a date for the graduation dinner and dance. A mutual friend set up Archie and John. “I would go on any blind date where I got fed,” John says.

When not in the shop, John passes the time with gardening and doing sudoku puzzles. When not teaching, Archie enjoys doing crossword puzzles, but is quick to add that she considers her work at the university to be recreational. Her passion for her students and her ongoing fascination with occupational therapy keep her driven, motivated, and learning.

Together, Archie and John are playful and full of life, poking good fun at each other and laughing at each other’s stories. And together, they are philanthropic, gracious, grateful, and happy to do their part for the community as legacy donors to the HSC Foundation.