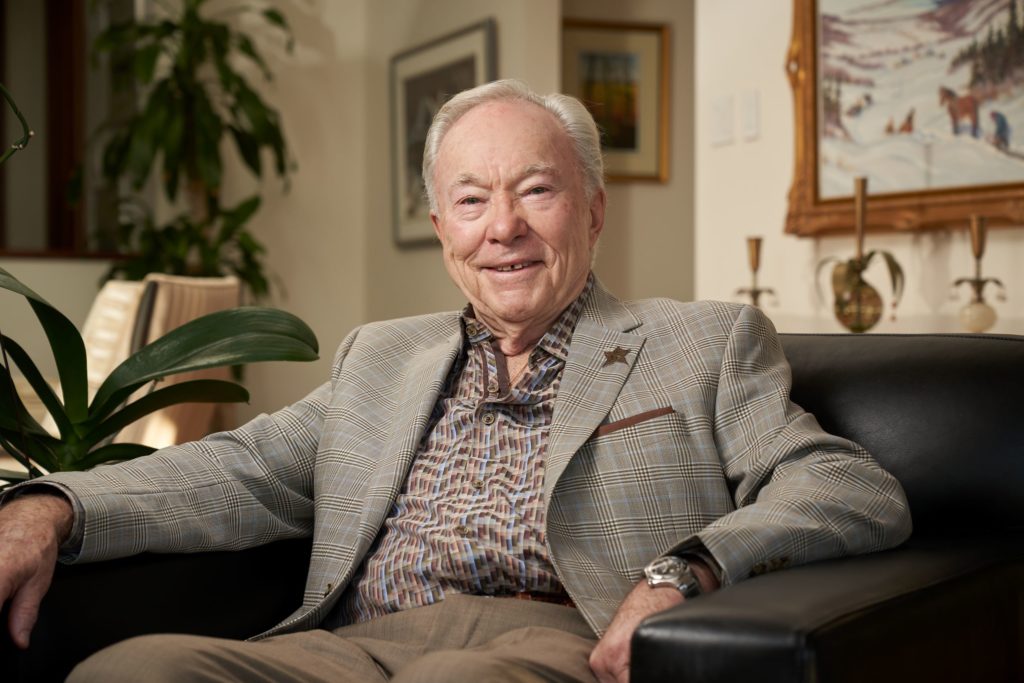 To understand Gary Steiman’s work ethic and immense dedication to the community, you do not need to look much further than the influence of his late parents, Joyce and Maxwell.

His mother was raised on a farm near Inglis, Manitoba, as a devout Lutheran, later moving into Winnipeg to work as a domestic. She is remembered for her positive attitude, generous spirit, and numerous donations to community organizations, especially after her four sons were happily married and living independently.

His agnostic Jewish father was hard working and entrepreneurial. He left home at the age of 14 after his mother suddenly died. He lived on the streets and did whatever he could to get by including delivering telegrams for pennies apiece and hiring others to work for him. He eventually opened the Elgin Café at Princess and Elgin, working 12-hour days and always making sure the homeless people around the restaurant had something to eat.

“He was a champion of the underdog,” says Steiman of his father.

Not one for idle time, Maxwell Steiman became Canada’s oldest “paper boy” at the age of 75, as the Winnipeg Tribune was having trouble finding neighbourhood kids to deliver the paper in the winter.

Gary’s father and mother passed away in their early nineties, some eight years apart. His father died at home and his mother lived alone in their apartment for several years before moving into a nursing home.

Gary Steiman was born in 1936 and raised with three younger brothers (Curtis, who passed away in 2017, Lionel, and Rodney) in Winnipeg’s storied North End. He played lots of sports, including hockey in the “Miniature NHL” organized by sports writing legend, Vince Leah, who also nicknamed Gary “Curly Steiman” when doing a report on a basketball game. Steiman also attended YMCA Camp Stephens on Lake of the Woods for five summers, a life-changing positive experience he reflects on with gratitude and pride. To help pay for it, young Gary had to put in some hard hours at his father’s café.

Steiman attended Roberston Memorial Kindergarten, Ralph Brown Elementary, Luxton Junior High, and St. John’s High School. On a career day in grade nine, Steiman was struck by the explanation shared by the visiting Chartered Accountant on the work of a CA.

“He said that to be a CA was to be a business doctor,” says Steiman. “That appealed to me because becoming a real doctor would have meant seeing too much pain and suffering. I decided then and there to become a Chartered Accountant.”

To enter the five-year program with the Institute of Chartered Accountants, he needed to finish grade 11 with no failures and a minimum average of 60%, and secure an articling position with a CA firm. By his own admission, Steiman didn’t work particularly hard in high school. He played hooky to go skiing on the Red River, and was generally more interested in sports and socializing than in having high grades. He finished grade 11, with a 59.8% average, just shy of the benchmark. He appealed to the Institute to round the average up to 60 and let him in anyway.

“This is the Institute of Chartered Accountants,” the CA Program Director sternly said. “We do not round.”

So, Steiman took a supplemental exam at St. John’s (in typing) and secured the grade he needed to begin his accountancy journey. The Steiman work ethic kicked in. He excelled in the program earning the Silver Medal in his third year. Shortly after earning his CA in 1958 at the age of 22, Steiman took a position with the federal income tax department so he could learn the system from the inside before pursuing his own entrepreneurial path.

Starting in high school, Steiman took an interest in downhill skiing and loved to ski the city’s river banks and travel to nearby Mount Agassiz and La Rivière. Throughout his studies and early into his career, he was active in the Winnipeg Ski Club, eventually becoming its president and spearheading a drive to build an alpine-style clubhouse on the banks of the Red River, and organizing ski trips to Aspen, Colorado. Membership grew from 120 to 1,400 people, making it the second largest ski club in Canada (not bad for a prairie city!).

Early in his career, while still with the income tax department, Steiman would enjoy his weekends visiting some of the exceptional nearby summer resorts like Clear Lake in Riding Mountain National Park, and Kenora, Ontario, on Lake of the Woods. On one trip to Clear Lake, he met Gwen McInnes, an attractive newly graduated RN who was celebrating with her fellow graduates at the local “Danceland”. He introduced himself to Gwen, they danced, and some six-and-a-half years later, on December 23, 1966, they were married at Immanuel Lutheran Church at College Ave. and McKenzie St. in Winnipeg’s North End.

“Gwen is the love of my life, my soulmate, my inspiration, the centre of our family, and the cornerstone of my success in business and in my adult life,” says Steiman.

After three years with the income tax department, he formed Monarch Management Ltd. in 1962 to offer consulting services on taxes and estate planning. Early in his private practice, Steiman was invited by Ralph E. King Jr. an apparel engineer from New York, to partner with him and rescue a failing Winnipeg clothing manufacturer. Steiman declined initially, remembering the unpleasant leather and sheepskin smells of his grandfather’s clothing factory. However, King, who was an articulate public speaker and Olympic-class track and field athlete, persisted. Steiman eventually signed on as a partner and General Manager of the company that became the forerunner to Gemini Fashions of Canada Ltd. in 1969 when Steiman became President and CEO. Through ingenuity and hard work, Steiman and his partners made Gemini into one of Canada’s largest outerwear and ski wear manufacturers and distributors, with customers and suppliers from around the world. Steiman was presented with the CME Excellence Award from Canadian Manufacturers & Exporters and was inducted into the Manitoba Manufacturers Hall of Fame.

In 1980, he was invited to join YPO, an international organization of thousands of young presidents (under age 45) who are dedicated to being better presidents through education, greater understanding, and idea exchange. He was actively involved and is now a “Gold” member.

In 1991 Steiman was diagnosed with prostate cancer. He was treated successfully and while in hospital (for 11 days) causing great worry to his family, he made the decision to slow down at work and enter into semi-retirement. His children were still young and he wanted to spend more time together as a family at home, on ski trips, and at their cottage in Clearwater Bay on Lake of the Woods. He retired as President of Gemini Fashions in 2003 and continues to enjoy time with Gwen and their children and their spouses: Tannis (Mike Scott); Sharon (Laurie Gorenstein); and Brad (Lisa). Gary and Gwen have seven grandchildren (Matthew, Abigail, William, Shea, Owen, Taylor and Sophie) ranging in ages from 11 to 25 at the time of writing. More than enough to keep a happy and busy family life!

Over the years, Gary and Gwen Steiman have demonstrated remarkable support of community organizations as volunteers and donors. They have been particularly active with the Juvenile Diabetes Research Foundation (JDRF), Siloam Mission, the Canadian Museum for Human Rights, International Development Enterprises, United Way, the Assiniboine Park Conservancy, and many other entities that help the afflicted, lift people out of poverty, improve health, and advance important causes—about 40 organizations in total every year.

As for his support of the HSC Foundation and his decision to leave a legacy gift, that was inspired in part by Gwen who is a member of the Foundation’s Bannatyne Legacy Circle and an Honourary Director of the Foundation. “She didn’t ask me to do this, but when we went to 2019’s Bannatyne Legacy Circle event and I learned more, I decided I wanted to participate financially and follow Gwen’s good example. The Health Sciences Centre Foundation is indeed a great organization.”

For Gary Steiman, philanthropy and community service are responsibilities he takes very seriously. “You learn these things not only from your parents, but also from your close friends and business associates,” he says. “And if you are successful in business, you have an obligation to give back, not only to your community but also to those throughout the world who need assistance. In this regard, there is no shortage of opportunity to help.”