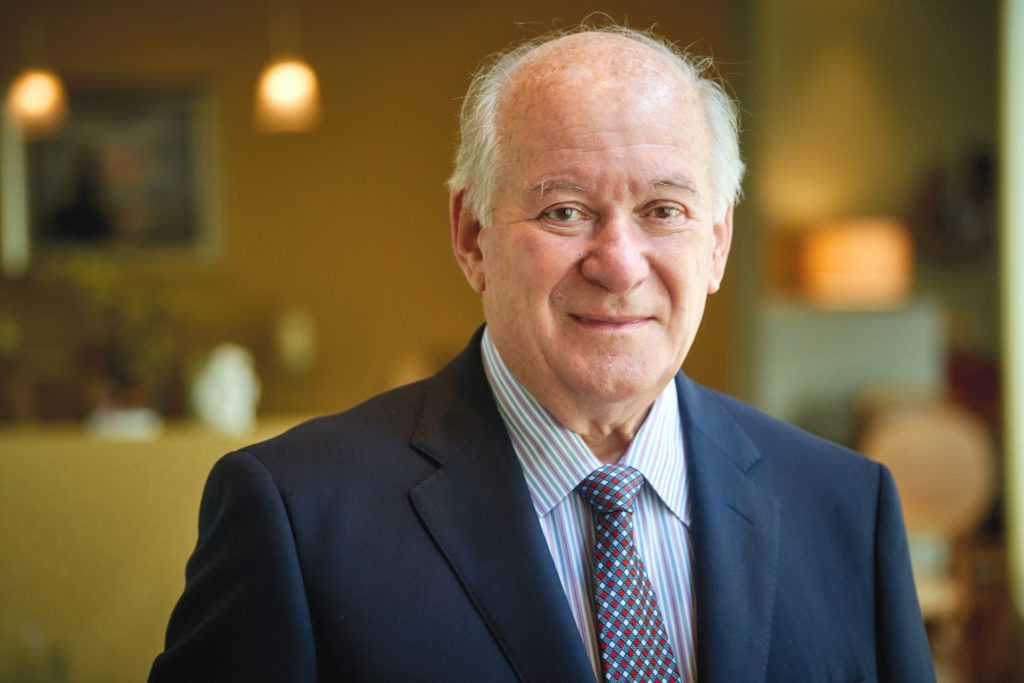 When Bob Cunningham was growing up in Clandeboye, Manitoba, in the 1940s, his family didn’t have a lot of wealth. What they did have was a spirit of community.

“It’s a Scottish tradition to offer fruitcakes as Christmas gifts,” says Cunningham, the founder of Cunningham Business Interiors. “My mother used to make cakes for less fortunate people than us and I would go with her to deliver them with my sled.”

It was a loving act of generosity—a theme that has characterized Bob Cunningham’s life of giving.

At the age of 18, Cunningham arrived in Winnipeg to find work to help support his family in Clandeboye. He immediately found a job at Community Chevrolet in the North End, rising to a managerial position in the parts department. It was an evening job, so to supplement his income he started selling door to door for the Fuller Brush Company during the day, eventually becoming the third leading salesperson in Canada. As his skills grew and his interests evolved, he moved on to an accounting position at International Harvester and then a sales manager position at American Stationery before deciding it was time to try business for himself.

In 1964, he launched Scotty’s Supply—an office supplies company—with a small loan and a tiny office on a site not far from where his office furniture business thrives today.

As his business took shape, Bob Cunningham and his wife Irene started their family. Their children are Robert Cunningham Jr., now President of Cunningham Business Interiors; and Bonnie Cross, who lives in Calgary. Robert is married to Dr. Jean Bodnar; Bonnie is the widow of Lysander Cross. Bonnie has two children: Tyler and Reanna.

“Everyone in the family gives back to their communities,” says Cunningham with pride.

Indeed, community service and philanthropy are cornerstones of Bob Cunningham’s identity. He has always believed that people must rally together to do what they can to make the community a better place. When invited to join the Health Sciences Centre Foundation Board of Directors in the 1980s, it was a quick yes as he had long understood the importance of funding health care.

At the age of four, Bob was run over by the back wheel of a farm tractor driven by his father. He has no memory of the incident, but knows he suffered severe injuries and was helped by skilled and experienced doctors in Selkirk, Manitoba. In later years, Cunningham’s mother died of a blood clot and his father from prostate cancer. His interest in improving the health care system through philanthropy and volunteerism had been reinforced by his parents’ experiences.

He served on the Foundation Board for six years and was a highly engaged member of the Allocations Committee that provided grants for research projects at Health Sciences Centre.

Aside from his support of the HSC Foundation, Bob Cunningham has been a generous supporter and an esteemed roll-up-the-sleeves volunteer for many other charitable organizations in Manitoba. At the time of writing, he is chairing a capital campaign for St. John Ambulance in Winnipeg and remains a Director Emeritus with Friends of Upper Fort Garry. In his spare time, he enjoys golfing at St. Charles Country Club, playing snooker at the Manitoba Club, and spending time with Irene at their Lac du Bonnet cottage. As for his participation in the Bannatyne Legacy Circle initiative, he hopes that those who read his story will become donors to the HSC Foundation or the HSC Foundation Honourary Directors Legacy Fund.

“I am a great believer in philanthropy and believe that there is no gift that is too small,” says Cunningham. “If we join together generously we can do great things for medical research and for health care.”