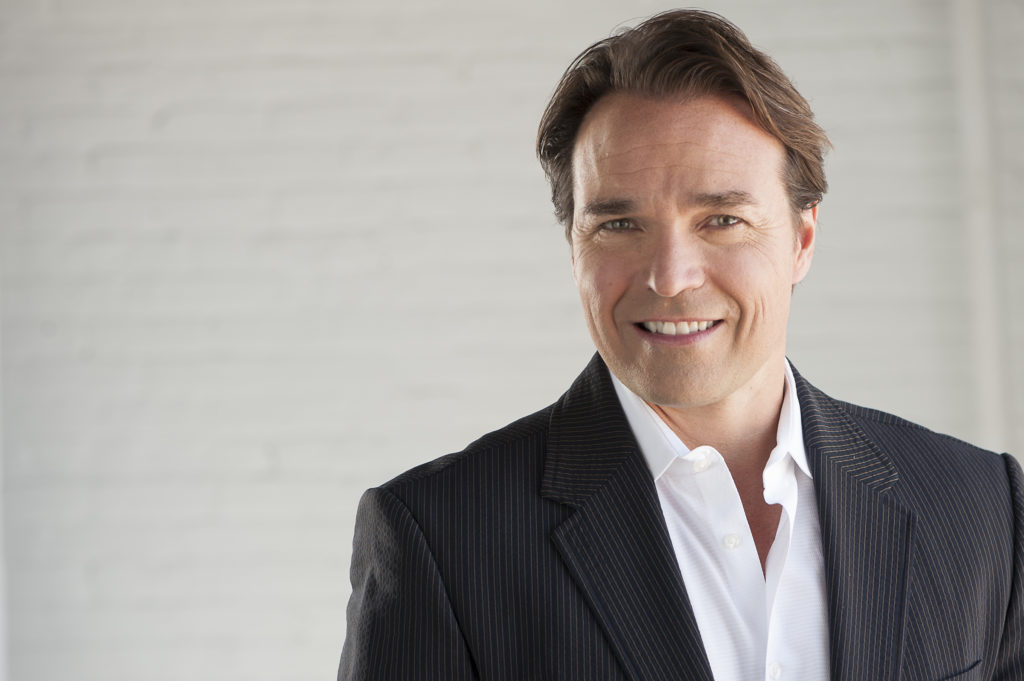 A family tragedy that struck when Kevin McFadden was 15 shone a bright light on the importance of health care. It was an insight that has shaped his passions, his volunteerism, and his philanthropy.

Kevin McFadden was born in Kamsack, Saskatchewan, and his father worked for the Hudson’s Bay Company’s Northern Stores Division throughout Saskatchewan. When McFadden was eight-years-old, his parents Garry and Donna moved to Winnipeg, following Garry’s work.

Young Kevin, as well has his siblings, attended Ryerson School. A playground at the south Winnipeg elementary school was named after Trent McFadden, Kevin’s younger brother who passed away at the age of 10 from leukemia. It was dedicated in his honour, and the gesture meant a lot to Kevin and his family. “I learned at an early age the impact of community support. The dedication of the playground in Trent’s name provides an everlasting memory for our family and it was Trent’s legacy in the eyes of his schoolmates and our family.”

“Trent received really amazing care at Health Sciences Centre. It was the best care possible at the time,” adds McFadden. “So at a young age, I also realized the importance of excellent health care. It was instilled within me as a core value.”

McFadden’s mother was very involved in Trent’s care and became a founding Board member of Ronald McDonald House, a special organization that serves young cancer patients and their families. McFadden organized fundraising events for the organization while in university and later served as President in the early 2000s.

After Ryerson School, McFadden moved on to Acadia Junior High and Fort Richmond Collegiate before earning his Commerce degree at the University of Manitoba. He graduated from Commerce in 1990 and then moved to Toronto to take a position in London Life’s benefits division. After three years, he moved to Saskatoon for five years before returning to Winnipeg to launch his business, McFadden Benefits, Pension, and Wellness. To share his knowledge with others, he wrote Bubble Wrap: The Benefits Book in 2015.

Along the way, he married Colleen in 2006. The McFaddens have three university-aged daughters: Alexa, Ashley, and Roxanne.

As McFadden’s term as President of Ronald McDonald House was winding down, he was approached to serve on the Board of the Health Sciences Centre Foundation. He joined the Board in 2005 and served until 2016, including two-and-a-half years as Chair. He was named an Honourary Director in 2017.

“I quickly learned the importance of the Health Sciences Centre Foundation Board and the significant responsibility that rests with the Board,” says McFadden. “Like with any organization, you measure it by the quality of its people. And it was clear to me very quickly that the people behind the Foundation were very passionate and committed to the mission. And it didn’t take long for me to share that passion. In hindsight, it was one of most meaningful volunteer roles I’ve ever taken on.”

He points to two key factors that enhanced his satisfaction and enjoyment as a Board member and as Chair: the commitment of the Board members and the clarity of their roles; and the HSC Foundation staff team led by President and CEO Jonathon Lyon.

Among McFadden’s highlights on the Board was his involvement in the landmark Breakthrough campaign that led to the development of the renowned Kleysen Institute for Advanced Medicine on the HSC campus. He fondly recalls taking impressed prospective donors on tours of this state-of-the-art medical and research facility. McFadden also remains deeply grateful for Hubert Kleysen’s mentorship, generosity of time, and transformational philanthropy that was so instrumental in bringing the project to fruition.

McFadden also remains grateful for the creative fundraising initiatives led by the Board and staff, especially the Celebrity Human Race, a long-time signature event for the Foundation.

For McFadden it was important to wind down his time as Chair with a solid succession plan in place. He was honoured to pass the gavel on to Tina Jones, who has served as Chair since 2015.

“I’ve always believed that in any volunteer leadership role, it’s incumbent on that person to play a major part in the succession plan,” says McFadden. “Jonathon Lyon and I actively pursued Tina and she has taken the Foundation and its results to a whole other level.”

The Foundation, he says, has been able to lead the way in making important changes at the hospital. “We’re a publicly funded system but government can’t do it all,” says McFadden. “The Foundation is now able to launch initiatives, set priorities, and go out and raise the money to purchase important equipment. I’m not sure if the public is always aware of how world-class we are in some areas, but I’d put Health Sciences Centre on par with any major hospital anywhere in the world.”

Today, McFadden is a National Board Director with Ducks Unlimited Canada, a role that speaks to his passion for the environment. He’s a former hockey player who now gets his fitness and recreation from cycling, hiking, and fishing at the cottage on Lake of the Woods that he and Colleen have enjoyed for 20 years.

With deep-rooted enthusiasm for health care and the environment, Kevin McFadden now considers his legacy.

“I see the environment and health care as areas that are universal and inclusive. I think it’s really important that people think about what their life legacy is. How do they want their kids to remember them? How do they want their friends, family, and community to remember them?,” he says. “We’re on this earth for a very limited and finite period of time and it’s a shame to not leave your mark. And if it’s for the good of society, even better.”