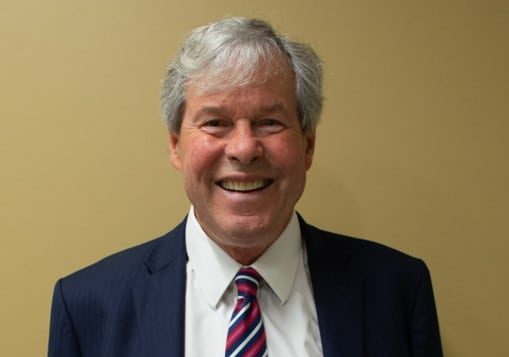 William S. (Bill) Gardner has been on the HSC Foundation Board of Directors since 2003 and remains as engaged as ever. “It’s always interesting, it’s increasingly fun, and it’s in my DNA,” says Gardner, a partner at Pitblado Law.

The HSC Foundation was established in 1976, with Gardner’s father, William C. Gardner, Q.C., serving as the Founding Chair. William C. was a lawyer and a World War II veteran whose ship was torpedoed and sunk in the Denmark Strait. He survived enemy fire and frigid waters while clinging on to pieces of wreckage. He later landed on Juno Beach on D-Day.

He was passionate about community service and took a keen interest in health care, following the lead of his own father, Dr. William A. Gardner, who was an orthopedic surgeon at the Winnipeg General Hospital.

“My Dad had been the Chair of the hospital’s Board of Directors,” says Bill Gardner, who serves as Vice-Chair of the Foundation. “While the government took care of the hospital’s day-to-day expenses, my Dad and others saw a major gap in funding for research. They realized that there had to be other sources of funding to keep the hospital moving forward.”

While Bill Gardner remains inspired by his late father’s efforts to launch and lead the Foundation, he also speaks passionately about his late mother Laura’s influence.

“She was relentlessly positive, cheerful, upbeat, friendly, and engaged,” says Gardner, “but underneath there was steel.”

Laura Gardner had wanted to become a doctor herself but was dissuaded by her brother who thought she would get married and leave the profession. While she abandoned her career dream, her interest in medicine never waned. She became very well read and was a superior caregiver to and advocate for her husband, and later served as an advocate for several friends. Laura Gardner also played an instrumental role in Winnipeg’s philanthropic community. The Junior League galas she planned with her friends at the old Royal Alexandra Hotel changed the fundraising landscape in Winnipeg.

One of Gardner’s favourite stories about his Mom was the time she overheard him and his Dad discussing a case they were working on together at the dining room table of the family cottage in Minaki, Ontario. They were convinced that their opponents had covered all the bases and it was a lost cause.

“I don’t want to hear any of this defeatist talk!,” Laura Gardner scolded. “You sit there until you’ve got it figured out!”

Needless to say, father and son got it figured out.

While Bill Gardner reflects proudly on his grandfather’s and his parents’ legacies, he is also extremely proud of his children: William Rennie Gardner, Dr. Rachael Elizabeth Gardner, and Leah Sydney Gardner. Will is a lawyer at the Winnipeg firm of Duboff Edwards Haight & Schachter; Rachael is a pediatrician who did her residency at Children’s Hospital and now practises on the HSC campus at the Manitoba Clinic; and Leah is pursuing her education in social work. Bill Gardner has three grandchildren, and his partner is Janine Bays.

Gardner was born and raised in Winnipeg and attended Princeton University and the University of Manitoba before practising law in Toronto for a few years, returning to Winnipeg in 1980. He is a graduate of St. John’s-Ravenscourt School where he continues to coach girls’ hockey. “I try to save girls from ringette,” he jokes.

Beyond his full-time law practice, coaching, and his work with the HSC Foundation, Bill Gardner is the Chair of the Manitoba Employers Council, Chair of the Engineering, Geosciences and Architecture Inter-Association Relations (EGAIAR) Joint Board, and is a member of the Executive of the Winnipeg Women’s High School Hockey League.

In the bit of free time that remains, you might find Bill Gardner listening to Deep Purple, the Rolling Stones, and other classic rock legends. “Except for talent, I have all of the attributes of a rock star,” says Gardner playfully.

Bill Gardner is famously good-humoured, but when it comes to his connection to the HSC Foundation and the role it can play to elevate health care for all Manitobans, he is deeply serious.

“Governments are increasingly challenged just to keep their heads above water,” he says. “It’s going to take private sources of funding—like what we are doing at the Foundation—to keep HSC strong and ensure that it can attract world-class professionals who have access to world-class technology.”

“As my father used to say,” adds Gardner, paraphrasing slightly, “‘all things are possible for people of good will’. I try to live by that motto every day.”